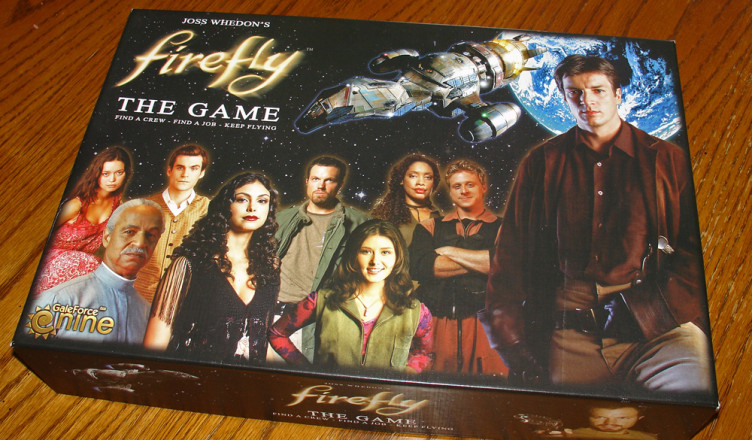 Serious game day! Joshua Wills, Vic Polites and Jim Best were here all day, with Jim Barton dropping in for the afternoon. We played 13 hours and didn’t even leave the table for food …

Jim Best brought this around and we played the starter scenario. Jim had a great chance to win pretty early, but botched the Train Job for Niska, who killed Wash in retaliation., and I was able to eek out a victory with my conservative strategy of running legal moral missions for low pay (mostly for the Alliance) with a cheap crew. Great theme and more fun than I expected, given its reputation as a bit multi-player solitaire.

We played two games of this as the first was an almost immediate disaster. The second was an easy win, despite getting an evil secret agenda reveal early on. As a genre, deck builders can feel sterile and theme-deprived, but I completely love the way this deck-builder ties in the movie themes. It just works great. I was playing the synthetic, as I like the versatile programming’s ability to make anything work well. I had thinned my deck down to 14 cards by the end of the game, so every turn was a high-strike engine.

Sentinels of the Multiverse (2011)

Jim Barton joined us to fight Gloomweaver in the Silver Gulch. The Gulch was actually more helpful than anything else, with the sheriff pinging away at Gloomweaver for the whole game. We had an ongoing/equipment heavy party, and since nothing ever killed any of them, we had no real problems. I played Absolute Zero and by the end was doing all kinds of complex math as cold and fire damage bounced around.

Jim Barton dropped out and the four us played this more serious game about abolishing slavery and saving slaves by getting them into Canada. It was fun, but not sure how much replayability the game has — the bulk of the time was spent subtly maneuvering slave catchers around, which felt a bit more fiddly than fun at times. Overall a a solid game, but not a top one.

I was not a big fan of the DC base version, as the theme seemed off in it (why are these villain fighting for me? Why am I playing Zatanna and yet another player has a card for Zatanna? Why are we competing with each other at all?) so this co-operative game expansion was a significant improvement. Still not as gone on this as most other deck-builders. There seems to be a few ways to play that “just work” and so playing has a very repetitive feel. I think I spent most of my time playing good cards one round, them using Zatanna to get them back into my hand the next. Fun, but repetitive. Then again, any game where I can play Zatanna in a magical corset has its amusing points.