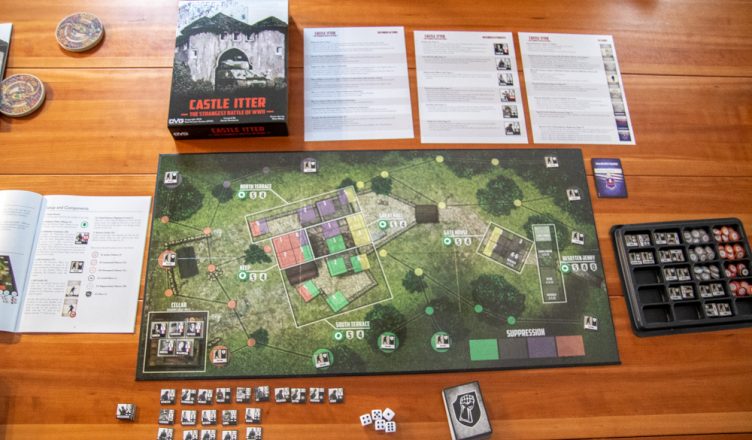 The Battle for Castle Itter was fought near the Austrian village of Itter on 5 May 1945, in the last days of the War in Europe during World War II. US soldiers joined forces with Wehrmacht infantrymen, an SS officer, an Austrian resistance fighter, and recently freed French prisoners of war to defend an Austrian castle against an attacking force from the 17th SS Panzergrenadier Division.

I came across this solitaire boardgame when it was mentioned on the Facebook group I’m a member of, and it seemed a fascinating subject. The creator, David Thompson, had worked on it for a number of years, so I backed it, and here are my first impressions. This is not a play guide or general review, just first impressions as part of a play report.

The components are very good. Solid board, thick cardboard and clear text. The glossy rules book is clear and logically organized. After my first play-though I’m pretty sure I’ll only need to refer to the 3 play aids (shown at the top of the picture above).

Very excitingly (at least for me) was the fact that all the counters fit into one of GMT counter trays! It makes the game fast to set up and most of the counters can be left in the tray until needed.

I set up the game (as per the top picture). Set up is pretty simple. It requires setting up a draw deck consisting of 4 stacked, shuffled sub-decks (thus allowing four “phases” of the game); this draw deck is used for the opposition engine, generating attackers and incoming artillery (oh so much artillery…), but that’s about the limit of complexity.

Off to play I went! The first 4 turns are when you place your initial forces (20 soldiers), each of which gets an action and the enemy starts bringing forces to bear. After these turns my board looked like this:

I had spent most actions on suppressing fire, with generally good effect. The tank is awesome at suppressing incoming enemies in its zone, which is the most likely avenue of attack, but it is the only space that when it is damaged too much, everyone in it dies, so I was (rightly!) concerned that things could go south very fast.

Things can indeed go bad rapidly. When a defense area is 6, there’s at least a reasonable chance a barrage might not damage it. When it is damaged and drops to 5, then it’s very likely to get damaged again, and when it’s 4 the odds are very high that a decent barrage will disrupt all defenders in that area. In the above diagram, both the south and north terraces have been heavily damaged, and in the next few turns I’ll get some bad draws which will disrupt all defenders in the north, and disrupt and kill 4 defenders in the south. However I will also eliminate that last purple SS unit and allow Borotra to escape, which will allow me to end the game 4 cards early, with the board looking like this:

I had 32 positive points (I delayed evacuating the last defender from the tank one turn too many, which was a big VP swing) but with 27 SS units on the board, my margin of victory was a narrow 5 points.

Bottom line — well worth the investment. It played rapidly and the rules were solid and never unexpected. The author states that they were particularly proud of the Line of Sight rules, and I agree. In particular it makes the corner squares that can see into multiple zones feel powerful. It also makes randomized attacks from enemy draw cards easy to resolve. The only worry might be that if you have difficulty distinguishing colors, it might be a bit tricky. Check an online version of the manual to make sure the color palette works for you.

I had two minor nuisances: The SS counters cover the number that tells where a new counter is to be placed, but it’s not hard to remember where they are. Additionally, I found the markers for “action used”, “command used” and “disrupted” easy to mix up and one or twice accidentally picked up disrupted markers when removing action markers. I might use the alternate wooden blocks for some of these next time.

But apart from those minor quibbles, I am very happy. It feels a bit like Zulus on the Ramparts in the way it has enemy forces advancing along paths to your defenses, with them reaching you being the main loss condition. The flavor rules are strong; I particularly like the rules for sending a French tennis star off to hurry reinforcements; the rules for using tank guns; the interaction between morale and officers; the ability of commanders to refresh people near them.

There are plenty of decisions to be made in the game; I don’t know if I was right to concentrate on eliminating machine guns and mortars. I’m not sure if leaving a gunner in the tank to keep suppressing as long as possible was a good plan or not. I’m thinking maybe I should not fill rooms completely as it makes adding reinforcements hard and if everyone in the room gets disrupted, it’s very hard to save them. I wonder if I managed the French prisoner’s inspiration correctly — maybe I should have sent one to the guardhouse earlier?

Atmospheric clean design; quality components and rules that are easy to digest; looking forward to adding the tactics cards for my next play through!