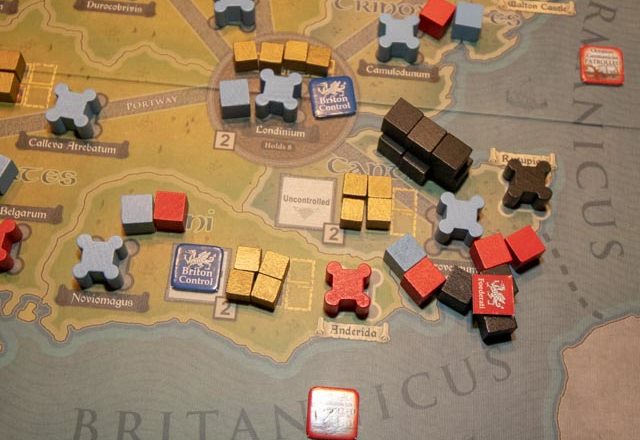 Following is a short AAR for a solo Pendragon game (Link to GMT Page for Pendragon). I ran without using the NPC flowcharts, instead just deciding on a turn-by-turn basis what made sense. I planned to play a full 6 epochs, but it did not take that long … 1140 First Epoch saw a lot of Barbarian activity — Vortigern invaded the south coast and the Dux response wiped him out, but cost a lot of time and killed a couple of cavalry — as well as three Foederati that the Dux created as shock troops. The Rising Seas event continued to add Saxon pressure in the South-East. Meanwhile the Scotti raided consistently, with most success in northern Wales, leading to an eventual settlement in Ordovices. 1330 Yet more strong Saxon raiding; this time the Saxons evaded all three attempted Dux intercepts and were able to return and build a settlement with four war bands to protect it. After this things settled down with raids and counter-raids, but nothing consequential going on. However the Civitates were able to pick up an event switching rule away from military and to civilian rule. Dux prestige tanked during this epoch as a number of towns were destroyed and they couldn’t force engagements. Then, just before an early epoch card arrived, a big scots raid had them grab 7 prosperity from a set of towns in the west … 1500 … so when the epoch was processed the imperium track just switched to autonomy (by only a couple of prosperity points), which meant that the Civitates just squeezed a victory. Essentially the Scotti raids caused autonomy and gave the game to Civitates.