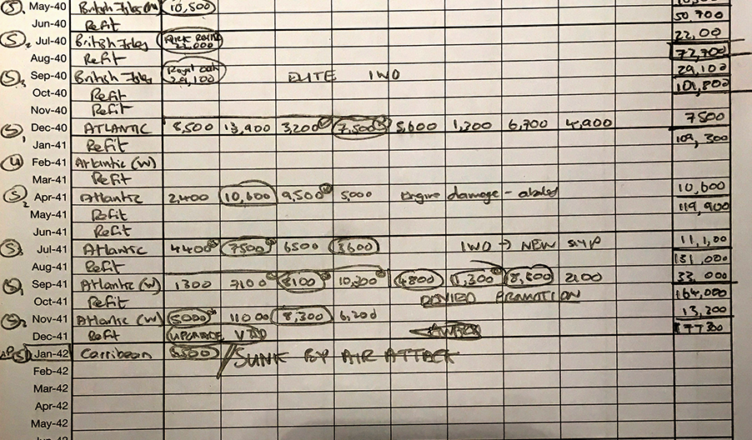 This is a record of a solitaire game of The Hunters, a solitaire game of commanding u-boars in WW2. The game consists of a series of patrols,  with the objective of sinking Allied ships.I started with a VIIB U-boat, designated U-113 under Kmdt Wilheim.

Much excitement with my first patrol! Success in my first contact, a small freighter (only 1900 tons) with an escort. I was able to sink it, but suffered some light crew damage. Subsequently sunk a 4,300 ton ship and headed home without incident. Pleased with a successful initial engagement.

A hectic patrol with no less than three conveys attacked — four ships sunk and two more damaged, but unfortunately one escaped and the other remained escorted and I had run out of torpedoes. But 27,200 total tons sunk with no damage taken!

Depressed. Could not find a target on this patrol. Returned unsuccessful. My superiors look disappointed and I fear this will hurt my promotion chances.

An uneventful patrol, sinking a single large freighter of 6,800 tons. One of my crew who has been trained as a doctor appears to have an aptitude for it, and is now considered an elite doctor, which is good.

Another uneventful patrol; a single freighter sunk — 10,500 tons. I sank it with a couple of well-aimed rounds from the deck gun, so returned with a full torpedo bay. Technically a successful mission, but it feels like I am letting the fatherland down.

Just as I was becoming depressed with tedious patrols of the British isles, this happens — my first encounter is with a British capital ship — the Ark Royal. I encountered it at night, and fired all torpedoes, both fore and aft at it using a night surface attack. Due to a number of duds, only one hit, but did good damage. I evaded the escort and followed it, repeating my tactics and this time three torpedoes hit it, and it sunk  later that day. Again, I was able to evade the escort and depart undetected. No other ships were encountered on this patrol, but I returned a hero — I was awarded the Knight’s Cross

I am now famous. I returned to the British waters and encountered the Royal Oak, a revenge-class battleship, anchored at Scapa Flow. Almost identically to my last combat, I damaged it, evaded contact and then destroyed it. Yet again I encountered nothing else on my patrol, but returned home to receive Oak Leaves on my Knight’s Cross. I also received promotion to Korvettenkapitän and was given the option to upgrade my u-boat. I declined at the present. I had taken some hull damage from depth charges — my first serious damage — so refitting took longer than usual. I also note that my first officer has proven very competent, elite even.

I requested a tour in the Atlantic, and was granted it. I attacked two convoys, but despite damaging several ships was only able to sink a single 7,500 ton freighter.

At my request I joined a wolfpack in the Atlantic, but it proved a poor choice, with no convoys or other ships encountered, and I returned home unsuccessful.

The enemy is improving significantly in their ability to detect our boats. On the positive side, our torpedoes seem finally to be improving. I no longer feel dread every time an electric torpedo is fired, knowing there is a 50-50 chance it will fail to explode. I sank a 10,600 ship in one convoy, but my engineer was seriously injured. After damaging a large freighter in a second convoy, my diesel engine took a hit, and without  a competent engineer, it proved inoperable and I limped home, abandoning the patrol.

A pleasant patrol. Only one convoy encountered, but I sank two of its ships after following it for a few days. On the negative side, my first officer has been assigned his own command. I suppose I should be glad for him, but now I have a new officer to work with. The rest of the crew now form a veteran group. They work smoothly and efficiently and I am confident in our ability to perform in the next few months!

I am furious! I requested a Wolfpack mission, and on it sank four ships with a total of 33,000 tons — a highly successful patrol . I took no damage at all, and yet was denied promotion. Apparently my failed February patrol caused a question mark over my ability. Incredible — here I am, wearing my Knight’s Cross with Oak Leaves, just returning from a highly successful patrol, and these idiots cite a single patrol from six months ago as reason to refuse promotion!

Again I successfully requested a Wolfpack mission, and on it sunk two ships for a total of 13,300 tons. With over 75,000 tons sunk since my Oak leaves, I was awarded Swords to add to my Knight’s Cross. Very few have attained such distinction, and I feel confident I will achieve the highest award with a few more successful patrols! A new boat, the VIID is now available, and despite its rarity I successfully requested a transfer to it. It has vastly increased range and dedicated minelaying capability. I am excited to try it out!

The allies continue to improve their technology, but despite the increased risk, with my new boat and a veteran crew, I feel confident in our ability to defeat them! I successfully requested a patrol in the Caribbean, looking to hit some unescorted targets and pick up a few more tons of kills.

Based on allied notes and logs during the war, the following appears to be the final patrol of Korvettenkapitän Wilheim: